My son was turning 2 and he doesn't like bounce houses or inflatables period.  Our son really likes to play any type of sport, so after looking into places that do parties, we decided to do a Soccer Party.  We had a Soccer Themed Birthday Party for my son's 2nd Birthday.  The hall we rented didn't allow us to put anything on the walls and it was a small room, so we had 1 main table decorated.  We had Chocolate Cake, Vanilla cupcakes, Grapes, Popcorn, and Chips.  We thought that it would be fitting to give water bottles as the party favor to each child. 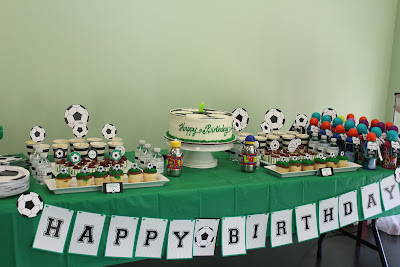 At the beginning of the party, we had a Facepainting person come in that also made Balloon animals for the kids.  Facepainting and Ballon animals by Face Painting Houston. We had an outdoor area where we set up a bubble machine, which was rented from Richards Party Rentals.  We also rented a Popcorn machine from Balloon 'n Novelty.

We had Soccer Tots come out to play with the kids for an hour.  They were great with the kids!  They played games with them as well as drills and then played some soccer.  I made my 2 sons' Tshirts for the Party.  I bought plain green tshirts and put their names on the back and their number (age) on the front.  I got the iron-on numbers from Hobby Lobby and a pack on iron on letters from Wal-Mart.﻿

After the kids were done with Soccer, they came inside for a Magic Show by Lanny Kibbey.  He was really great!  The kids and the adults really enjoyed him.  He kept the kids' attention for about an hour and the kids were never bored.
﻿

We had asked our guests not to bring a gift for the birthday boy, but instead bring a gift for a special child with cancer.  All of the gifts were donated to the Cancer Center at the Texas Children's Hospital in Houston, TX.  The Cancer Center provided me with a list of toys that they are in need of and I forwarded that list to each guest as soon as they RSVP'd.
﻿ 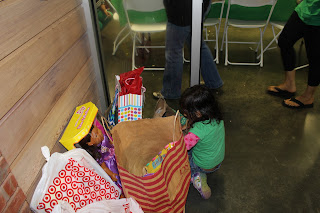 The Water Bottles that were given as Party Favors were from Toys R Us and Old Navy. 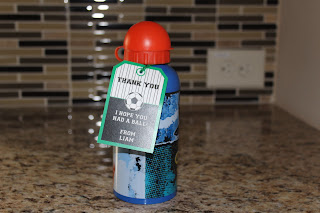 Email ThisBlogThis!Share to TwitterShare to FacebookShare to Pinterest
Labels: Party